The TRiP generated the VALIUM (Vermilion-AttB-Loxp-Intron-UAS-MCS) series of vectors for the incorporation of RNAi hairpins into attP landing sites (Ni et al. 2008, 2009, 2011).

Features of all VALIUM vectors

VALIUM1, our first vector, contains a multiple cloning site (MCS) that allows a single PCR product to be cloned in both orientations to generate the hairpin construct. Additionally, VALIUM1 contains two introns: the white intron, located between the inverted DNA repeats, which has been shown to reduce toxicity in bacteria; and the ftz intron, followed by the SV40 polyA tail to facilitate hairpin-RNA processing and export from the nucleus. This vector proved effective for transgenic RNAi (Ni et al., 2008) and a number of TRiP stocks have been generated in VALIUM1.

VALIUM10 was found to be more effective for RNAi knockdown than VALIUM1 due to insulator sequences that increase significantly the level of expression of the hairpins (Ni et al., 2009). Instead of the VALIUM1 MCS, VALIUM10 contains a recombination system that facilitates the cloning of the hairpins. VALIUM10 also contains two ftz introns to further enhance silencing.

Primers for the TRiP VALIUM1 and VALIUM10 double stranded hairpins are designed using the DRSC's amplicon design tool "Snapdragon". The PCR product from the hairpin is designed to be 400 - 600bp long. Portions of gene transcript sequences are used that are common to all splice-forms of the gene of interest. Ideally regions that are free of 19bp matches to other genes are used. If there are no such regions of sufficient length, then regions with less than five 21bp matches to other genes are used. Primer3 (Rozen and Skaletsky, 2000) is used to cull the primers once an appropriate sequence is chosen. Any primer pairs whose reverse primer has the sequence CCAC at the 5' end are rejected. An extension of CACC is added to the 5' end of the forward primer.

The TRiP found that short hairpin RNAs (shRNAs) containing a 21-bp targeting sequence embedded into a micro-RNA (miR-1) backbone are very effective for gene knockdown in both the germline and soma (Ni et al. 2011).  The 2nd generation VALIUM vectors use a microRNA cassette is based on the shRNA design of Haley et al. (2008, 2010) with modifications (Ni et al., 2010). All second generation VALIUM vectors contain vermillion as a selectable marker; an attB sequence to allow phiC31-targeted integration at genomic attP landing sites; two gypsy sequences to enhance hairpin DNA transcription; and two pentamers of UAS, one of which can be excised using the Cre/loxP system to generate a 5XUAS derivative.

VALIUM20 features the hsp70 basal promoter; a multiple cloning site (MCS) for cloning shRNAs in a miR1 scaffold, and a ftz 3'UTR intron followed by a SV40 3'UTR as a source for a polyA signal sequence. Our data shows that VALIUM20 gives a stronger knockdown than VALIUM10 in the soma, and works well in the germline (Ni et al., 2010). 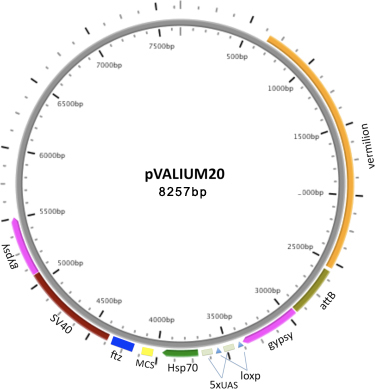 VALIUM22 features the P-transposase core promoter; a multiple cloning site (MCS) for cloning shRNAs in a miR1 scaffold, and a ftz 3'UTR intron followed by a K10 polyA. VALIUM22 triggers effective RNAi knock-down and corresponding phenotypes in the female germline. However, the P-element transposase promoter is less effective than the hsp70 basal promoter for driving expression in somatic cells. 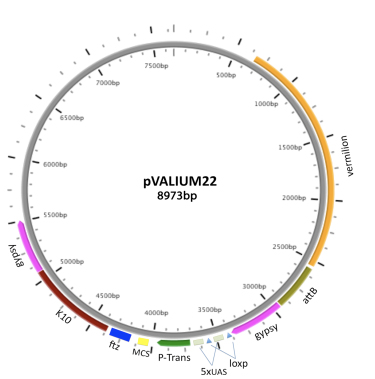 VALIUM21, a variant of VALIUM22, differs only in that it lacks the ftz intron and gypsy sequences found in VALIUM22. It is also effective in the germline, but less so in somatic cells. Only 95 TRiP stocks have been generated in the VALIUM21 vector. 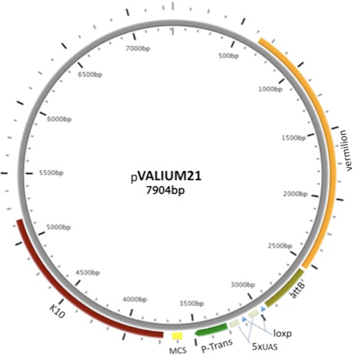 To design an shRNA for any given gene, the sequences for all exons or portions of exons common to all transcripts are obtained. These sequences are reverse-complemented and all possible 21-bp long sub-sequences are determined. Any sub-sequence with matches to other genes 16 bp-long or longer are removed from consideration. Each sub-sequence has a score calculated based on the formula given by Vert et al. (2006). The top scoring subsequences are selected. A top strand oligo is designed by concatenating "ctagcagt", the sense-strand oligo, "tagttatattcaagcata", the anti-sense oligo, and "gcg". A bottom strand oligo is designed by concatenating "aattcgc", the sense-strand oligo,"tatgcttgaatataacta", the anti-sense oligo, and "actg".

This process is automated by a Perl program developed internally at the TRiP. Primer design can also be done at the DSIR website (http://biodev.extra.cea.fr/DSIR/DSIR.html) using the 21nt siRNA option at default setting. The only difference is that the reverse complement has 2nt offset. We suggest using only the guide strand of DSIR output and then reverse complementing without the 2nt offset. 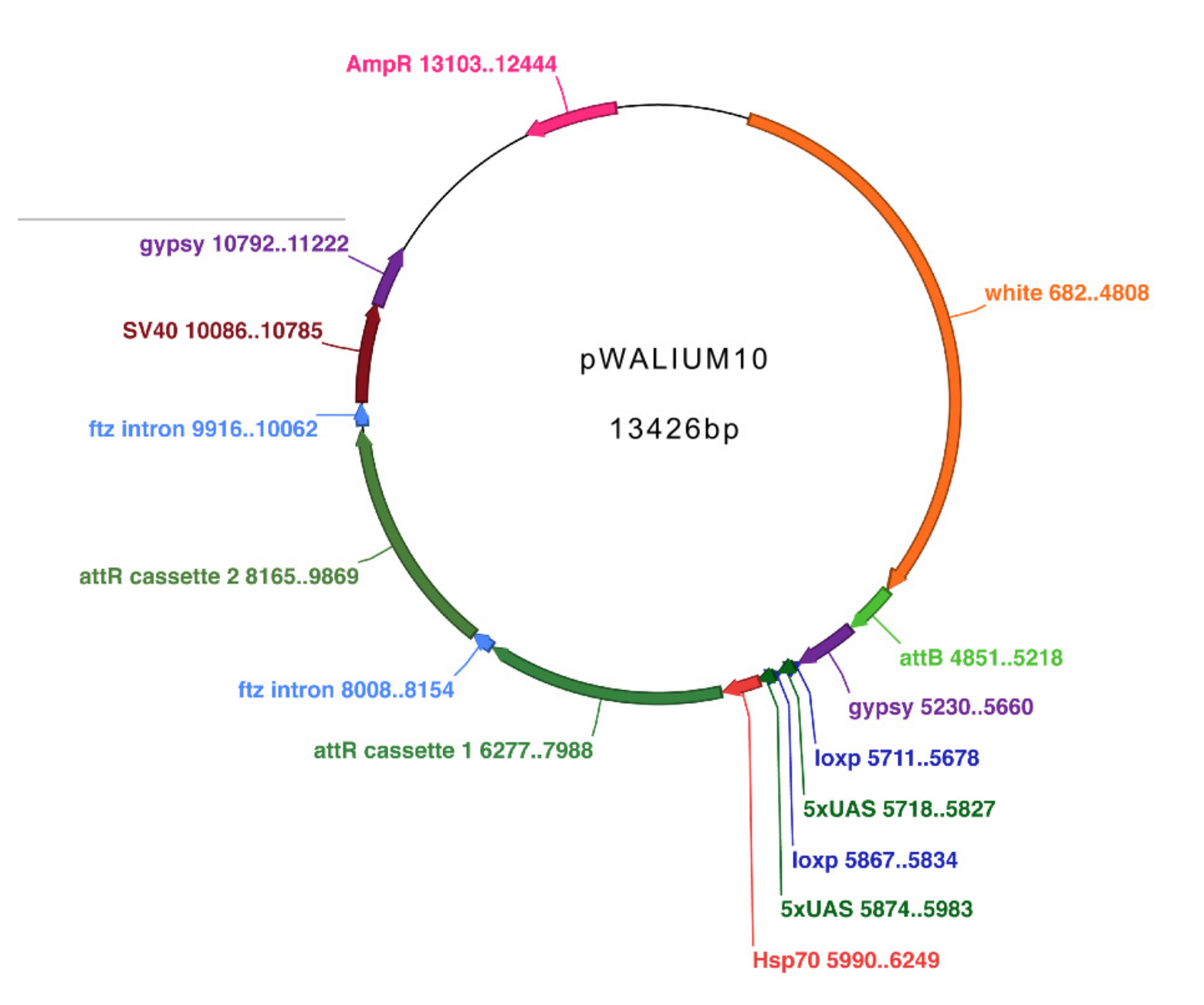 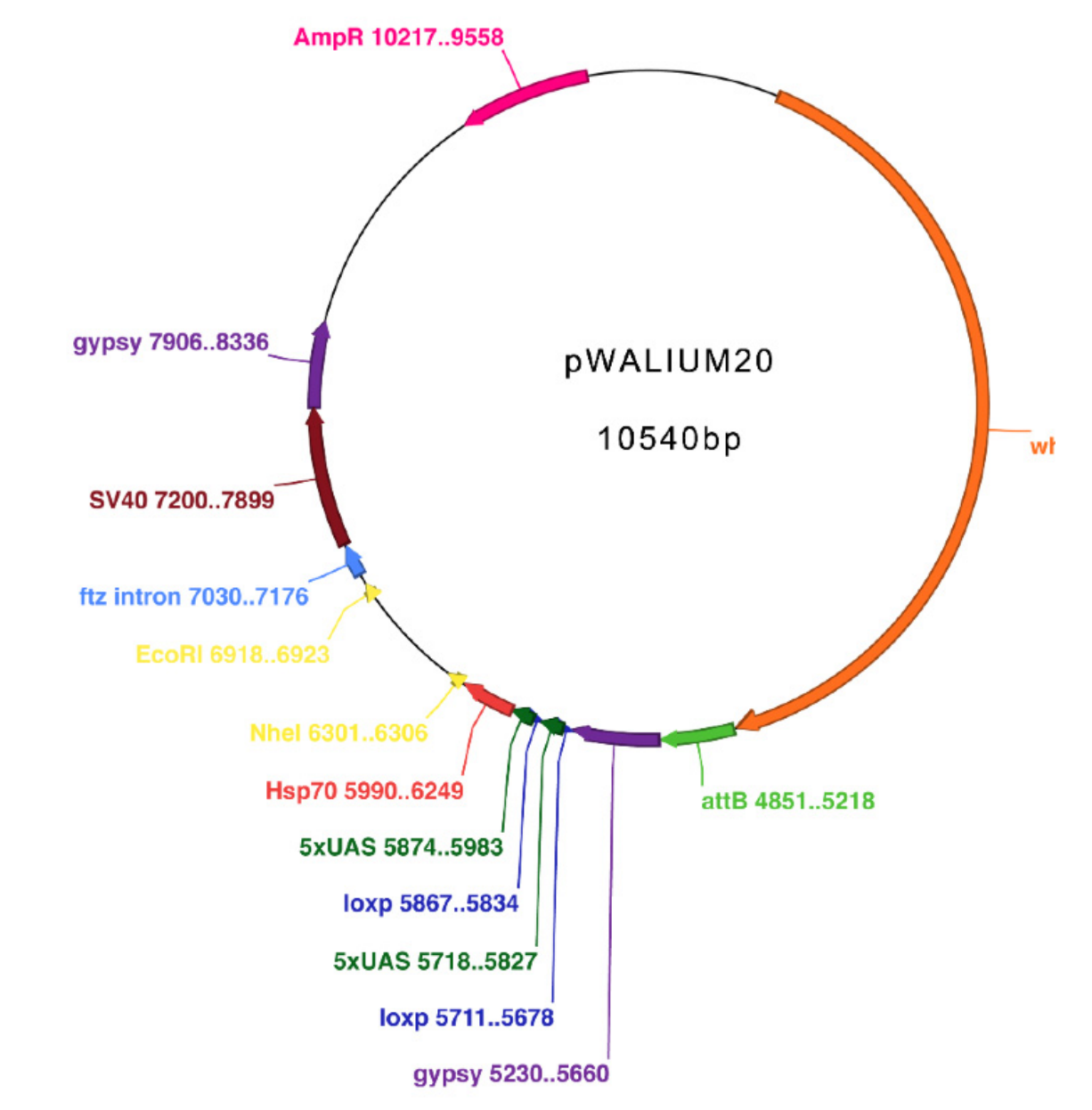 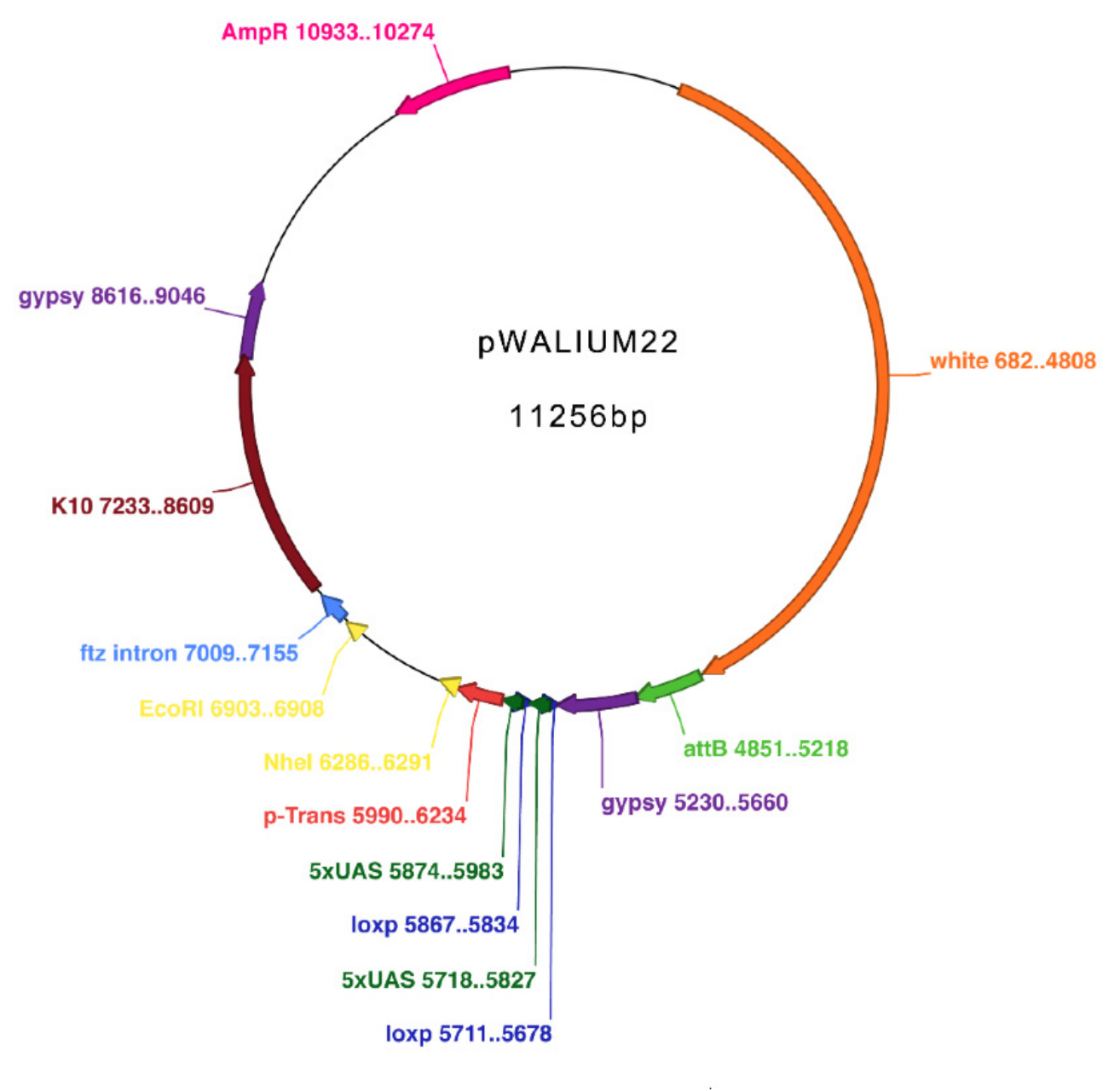 A QUAS vector for RNAi

The Q system (Potter et al. 2010)  has two main parts: QF, a transcriptional activator, and QUAS, a short DNA sequence which QF specifically binds to activate gene transcription. By combining the GAL4/UAS and QF systems it is possible to express (or knockdown) two different genes in two different cell types in the same fly. For example, to express geneX in the germline and geneY in follicle cells, flies of genotype germline-Gal4, UAS-geneX; follicle cell-QF, QUAS-geneY, can be generated. To apply this system to RNAi, the TRiP built and tested a new QUAS vector, pW20-QUAST.

Construction of a QUAS vector for RNAi

From the TRiP RNAi vector, WALIUM20, the two copies of loxp-5xUAS sequences were deleted and replaced with the 94-bp QUAS sequence (five copies of the QF binding site). Briefly, the QUAS fragment was obtained by PCR from the pQUAST vector (Potter et al.2010). The linearized WALIUM20 backbone was generated by PCR from the WALIUM20 vector to exclude the two copies of loxp-5xUAS. Then the QUAS fragment was inserted into the linearized WALIUM20 backbone using an in-fusion reaction (Clontech).